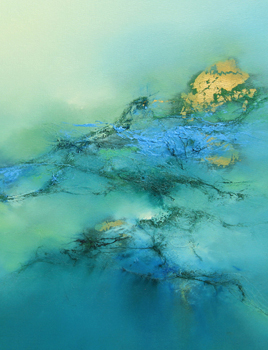 I continued with more experimentation in 2016, trying out new media and ideas. In April I attended a workshop with Joanna Kidney in encaustic medium in the RHA. This was a wonderful weekend meeting a lovely group of artist’s most of them beginners in the medium like myself. Joanna is a lovely kind and patient teacher and we all learned a lot. Hot wax is similar to cold wax though more complex technically in its use.

Later in the year I attended a workshop on Chinese calligraphy with Kazuaki Tanahashi. At 83 years of age, he still travels the world giving workshops in his craft….he is an amazing human being! I hope to incorporate the calligraphy into both the cold and hot wax medium painting. Watch this space….

In the meantime I am also collaborating with a group called  Grid Collective, a small group of four artists comprising a photographer, a sculptor, and two mixed media painters. Our upcoming exhibition is taking place in Celbridge Library, Celbridge, Co. Kildare. It opens on Thursday February 23rd, and will run for a week during library opening hours. For more details, check out our group website www.facebook.com/Grid-Collective-233695273660738/